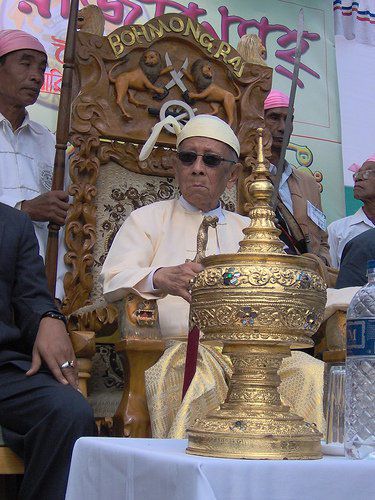 The history of Raja of the Bohmong Circle

By historical accident, a direct male-line descendent of King Bayinnaung still holds hereditary office in neighbouring Bangladesh. A son of King Nanda Bayin (son of Bayinnaung) was placed in charge of an area around Chittagong by the King of Arakan in 1599 (after the successful Arakanese attack on Pegu). He was Maung Saw Pru and reigned until 1631. Ever since, his descendants have ruled over what's become known as the "Bohmong Circle", home to over 200,000 people of Arakanese, Burmese, and Mon ancestry in the Chittagong Hill Tracts, now in Bangladesh. This is a photograph of Raja Aung Shwe Pru, the 15th "Raja of the Bohmong Circle", a 16th generation descendent of Bayinnaung. He passed away in 2012. The current Bohmong raja is U Saw Prue.