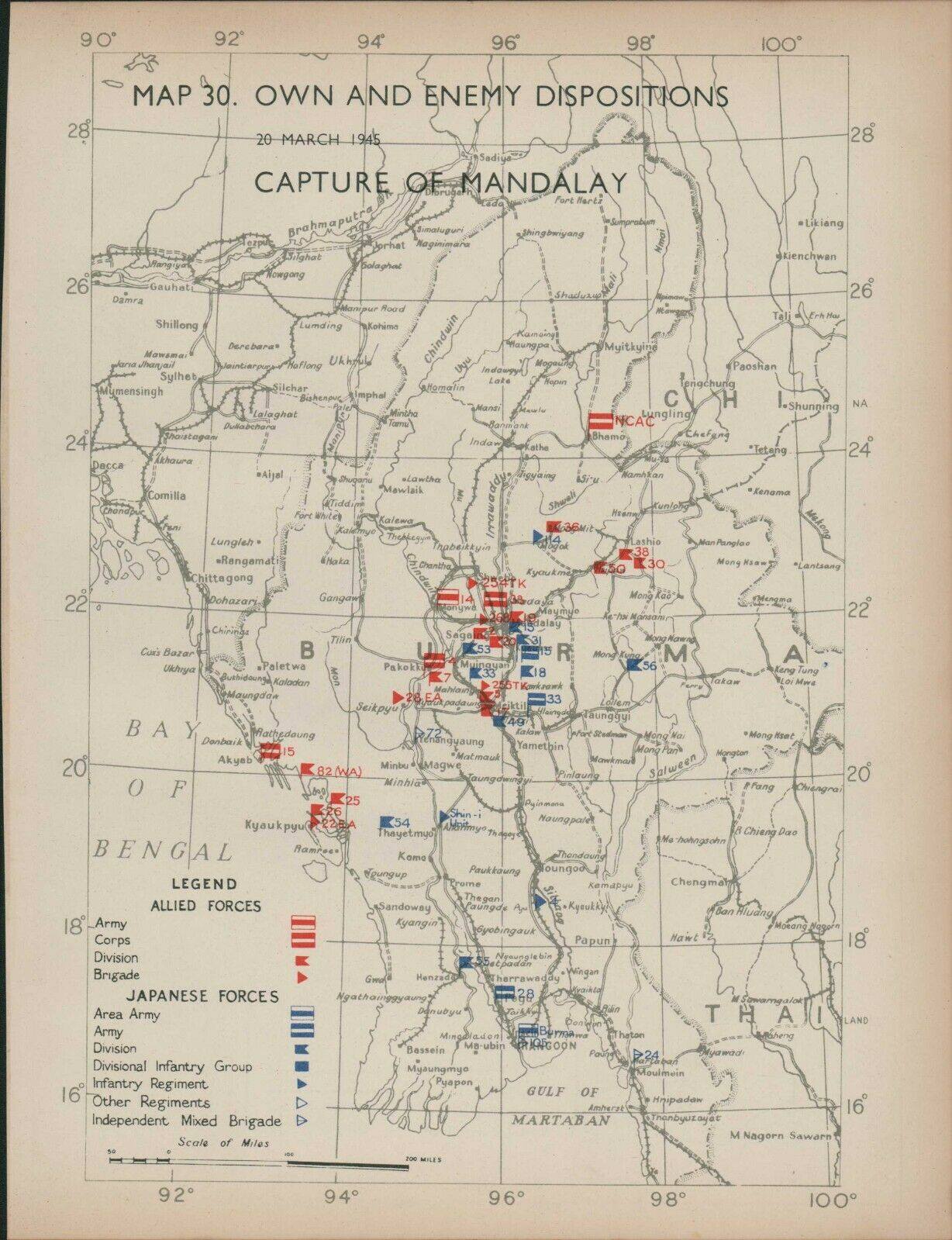 The Axis powers were then everywhere in retreat. British and American forces were crossing the Rhine and Soviet armies - over 2 million strong - had taken Poland and were approaching Berlin from the east. In the Pacific, American Marines had defeated the Japanese at Iwo Jima and begun the firebombing of Tokyo itself.

At Cairo 15 months earlier, the leaders of the new “United Nations”, Franklin D. Roosevelt, Winston Churchill, and Chiang Kai-shek, agreed on an overland invasion of Burma, primarily to restore links between India and China. In June 1944, Allied forces decisively defeated the Japanese at the battles of Kohima and Imphal (the “Stalingrad” of Asia). At the same time, Chinese armies and American special forces attacked the Japanese in northern Burma, taking the strategic airfield at Myitkyina, in August after months of intense fighting, and connecting the new Ledo Road with the old Burma Road from Lashio to Kunming.

Divisions of the British 14th army captured the Shwebo plain in January. Other divisions took the Arakan that same month. The 14th Army was then the largest single fighting force in the world, Indians, Britishs, Africans, Gurkhas, Burmese and others, totaling over 1 million men by February 1945.

The Allies then prepared to cross the Irrawaddy. It would be the longest opposed river crossing in all of WW2. On 14 February 1945, motorized British Indian battalions including over 100 tanks crossed the Irrawaddy river at Pakkoku-Nyaung-U and then pushed straight to Meiktila. This was a dramatic move that caught the Japanese entirely by surprise. The “Japanese Burma Area Army” under General Kimura Hyotaro had lost 55,000 men at Imphal and Kohima were expected the main Allied thrust would be further north near Mandalay. In a historic failure of military communications, a Japanese officer on Mount Popa had signaled a desperate warning that 2,000 Allied vehicles were driving towards Meiktila. But the Japanese Burma Area Army HQ assumed this was a mistake and he must have meant 200 vehicles! On 5 March Meiktila fell to the 17th Indian Division and the 255th Indian Tank Brigade (part of General Frank Messervy’s 4th Corps of the 14th Army).

The “Battle of Meiktila” was the only biggest tank battle ever in Burmese history. The Japanese launched a fierce counterattack but by late March retreated south.

By this time the Allies had seized Mandalay as well. On 9 March, Gurkhas stormed Mandalay Hill, fighting hand to hand over 36 hours against entrenched Japanese positions. The Japanese then attempted a fierce defense of the royal city itself. Over the next ten days, the (UK) Royal Air Force and American Ten Air Force, dropped millions of tonnes of bombs on the old city walls. After intense fighting, on 20 March the Japanese finally surrendered.

Over 30,000 men were killed or wounded (on both sides) in these two battles. The war in Burma was then essentially won. Tens of thousands of Japanese soldiers, weak, injured and often starving, where now making their way on foot towards Thailand. Over the following 5 weeks, The 14th Army moved quickly to Rangoon, capturing the capital on 3 May just as the Monsoon rains were beginning.

Germany surrendered 4 days later. Japan surrendered in August. If the Allies had not captured Meiktila and Mandalay in early 1945, Burma’s post-war history would have been entirely different. Rangoon would have been under Japanese occupation at the time of surrender in August 1945. The British 14th Army would not have accepted any moves by the Burma National Army to switch sides. The leadership of the Burma National Army would almost certainly have been imprisoned, likely hanged for treason. The British may then have tried to impose their post-war plans on Burma (as outlined in the “White Paper” of May 1945 without General Aung San and his colleagues). Exactly what would have happened next is anyone’s guess (possibly a communist-led insurrection that may have been successfully crushed, as in Malaya, or not, as in Vietnam).